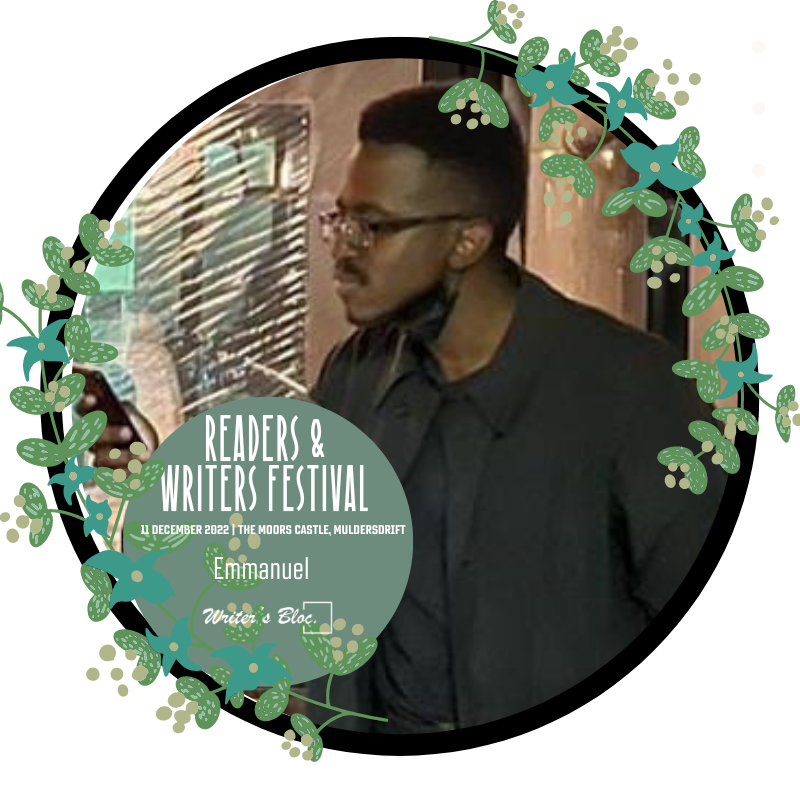 When it comes to poetry, we know that anything goes. Use of language to a poet is so powerful as they are able to use their words to paint vivid master pieces and cause an emotive response from the reader/listener taking them on a journey through their minds, and while sometimes questionable, most of the time it is absolutely beautiful.

When one talks of painting a vivid story through humour along with striking metaphors, one needs to look no further than Emmanuel Mthethwa. His beautiful writing allows you to explore his thought processes clearly and takes you on a journey through his pieces wonderfully and sometimes leaves one in quite a shock. His writing style and delivery is something to see and we are glad to be having him at our Writers Bloc Readers and Writers Festival

Emmanuel has been a big fan of hip hop from a very young age and he believed that poetry was his entry point into it due to their similarities and how they feed into one another.

Through his writing, Emmanuel confronts topics like death, childhood and parenthood as he finds that these can be quite relatable topics. He masters this with his beautiful elaborate writing and adds his own flare by having a sprinkle of humour on the topics added to the top. He believes that by adding humour to these dark topics they become more palatable and give the topics more depth.

Emmanuel mentions that he seeks inspiration from his childhood self who he claims to be “so much cooler” than his current self as he had so much “bravado, self-confidence and pride”. He admits that a lot of this is to do with a lack of experience, but still sees him as an inspiration due to it. He aspires to reach that level of self assurance again.

Like all writers, sometimes you hit that brick wall and Emmanuel’s personal way of overcoming bigger issues is to break the problem down slowly and gradually wearing it down day by day, something he calls “death by a thousand cuts”. When it is a more minor adversity in writing, like finding the correct rhyme word. Emmanuel will either re-arrange sentences or pick a different word. However, with Emmanuel’s “procrastination” attitude and always rushing, he does not focus on these small details.

Emmanuel claims to be a “serial procrastinator” and tries to finish work weeks in advance but the lack of urgency makes it difficult for him. He always gets it down in the end, and rather well. He says his secret to this is coming up with the endings first as it allows him not to get stuck in the end.

Emmanuel is a fascinating writer, and the way he tackles topics is absolutely amazing. His light hearted, humours tons on the dark topics he portrays really outlines his character and hones his writing style and expresses it beautifully. We are more than excited to have Emmanuel bless our stage at our Readers and Writers Festival.